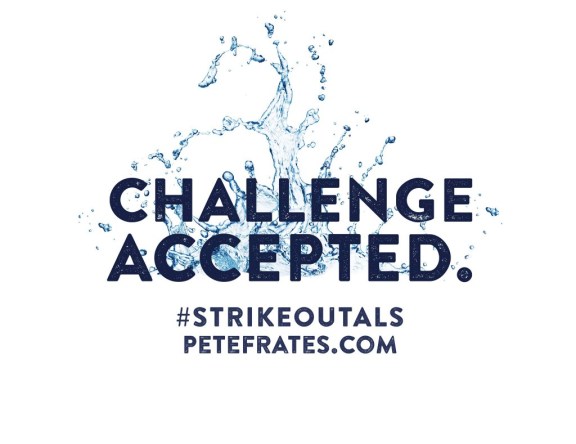 If you have facebook or twitter I’m sure you’ve seen the Ice Bucket Challenge. #IceBucketChallenge is trending and videos of people dumping icy water on their head have taken over social media.

If you have somehow missed this here is a simple breakdown: A person dumps ice water on themselves, and then they challenge others to do the same. If those people refuse, then they must make a donation to an ALS charity. If they accept the challenge, the original challenger makes a donation. Either way, awareness is raised and a donation is made. (Originally the donation was $100, but I think ANY donation is sufficient–every dollar counts and not everyone has $100 to spare)

The challenge was started, locally, by Pete Frates. A 29 year old from Massachusetts who has been  living with ALS since 2012. Frates is a former Boston College Baseball player who works incredibly hard to raise awareness of Lou Gehrig’s Disease.

If you don’t know anything about ALS, here is some info from ALSA.org: Amyotrophic lateral sclerosis (ALS) is a progressive neurodegenerative disease that affects nerve cells in the brain and the spinal cord. Motor neurons reach from the brain to the spinal cord and from the spinal cord to the muscles throughout the body. The progressive degeneration of the motor neurons in ALS eventually leads to their death. When the motor neurons  die, the ability of the brain to initiate and control muscle movement is lost. With voluntary muscle action progressively affected, patients in the later stages of the disease may become totally paralyzed. (you can learn more HERE)

Symptoms include; muscle weakness in one or more of the following: hands, arms, legs or the muscles of speech, swallowing or breathing. Twitching (fasciculation) and cramping of muscles, especially those in the hands and feet. Impairment of the use of the arms and legs. “Thick speech” and difficulty in projecting the voice, and in more advanced stages, shortness of breath, difficulty in breathing and swallowing.

There is no cure. In fact, other than one drug that can help slow progression, there isn’t even a treatment that halts or reverses ALS.

So why the Ice Bucket Challenge? Well, why not?  We run and walk for cancer, we jump in the frigid ocean for the Special Olympics, we bike for MS. So why not dump water on our heads for ALS?  It’s something ANYONE can do. I can’t run a marathon (well, maybe I COULD, with lots of training and even more tears) but I CAN stand in my backyard with my family and dump a bucket of ice water on my head.

Why did I do it? Well, I’ll tell you one thing for sure, I didn’t do it to be “cool” (bad pun) as so many have been saying of those participating.  I did it because I have friends who have loved ones who are living with ALS and other friends who have lost loved ones to this monster.  I did it because I can. And if my video, and subsequent posts (including this blog post) can raise even a single dollar to fight against this beast, then I am happy to have done it.

Sure, I could just write a check (if I had checks. Do people still use checks?) but, this is fun, and it gets people talking!  I have hundreds of friends on Facebook. and I tagged my friends which in turn shows my video to hundreds of their friends…when they do the challenge there are hundreds more who see it.  Thousands of people see the videos, thousands of people who may then think to make a donation or at least do a little research on what ALS is.

I’ve seen people posting on Facebook about how this challenge is stupid and pointless. That it isn’t raising any kind of awareness or money. They are wrong. According to the ALS Association, this week $168,000 has been raised, online nationally. (This number was released on Aug. 8th and doesn’t include the donations that folks are making to local chapters)  Last year, during this same period of time,  $14,000 was raised.

Is the Ice Bucket Challenge working?  Yeah, I’d say so.

The ALS Association thinks it’s wonderful, as do the people who are living with this disease and their friends and family.   So why do some people have such a problem with a fun little challenge that is raising awareness and clearly, funding, to such a terrible debilitating disease? Why make negative comments about people who are trying to do something positive? Why?

Instead of complaining about your news feed being full of “stupid” videos, close out of Facebook, and go to alsa.org to make a donation. I challenge you!

To learn more about ALS or to make a donation visit  www.alsa.org
And check out Team FrateTrain on FACEBOOK