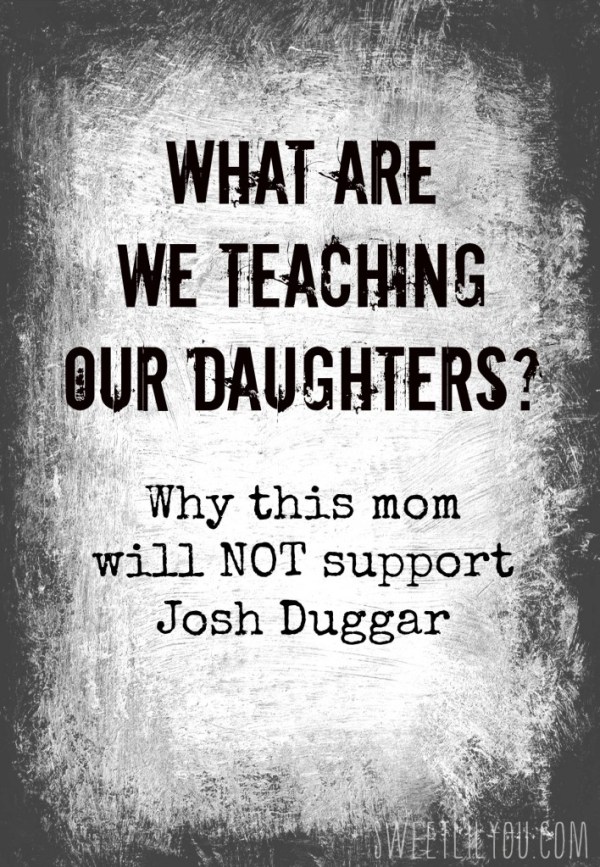 Why This Mom WIll NOT Support Josh Duggar

I try not to get political on my blog. I don’t like to start any sort of conflict here, but…  Sometimes, I just can’t keep quiet on a topic.

As a mom, I feel that I need to speak out regarding a topic that has been all over the news and social media the past two days. A topic that I literally lost sleep over last night. 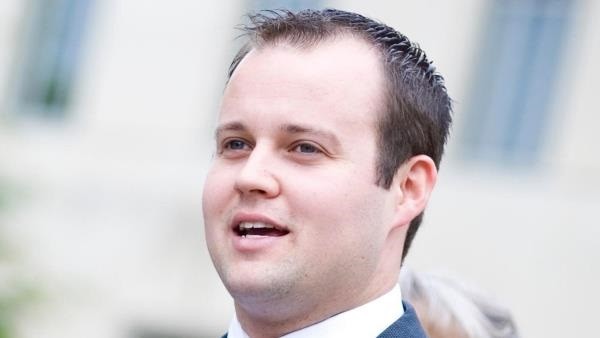 If you have not heard/read/seen the news, Josh Duggar was accused of molesting 5 young girls, when he was a teenager.  He has come out, and admitted that he did, in fact, molest these girls. He says, “Twelve years ago, as a young teenager, I acted inexcusably for which I am extremely sorry and deeply regret. I hurt others, including my family and close friends.”

I’ve been reading a lot about this Josh Duggar thing and I am absolutely shocked, appalled and disturbed by the number of people, the number of PARENTS, that are saying “oh, well, he was just a kid…he’s sorry, so let’s just let bygones be bygones, we all make mistakes.”

Here is a list of a few common, teenage mistakes:

Hmm…You know what isn’t on that list?  “Sexually assaulting, or molesting elementary and preschool aged girls and siblings” Why? Beacuse that’s not a “teenage mistake”

What he did was commit a horrific crime. A crime for which there were no real consequences. No real punishment.

Had he murdered someone at age 14, he would have been arrested, and at least put into a juvenile detention center, if not tried as an adult. However, in this case, it was all pushed under the rug, hidden, until it was no longer, legally, an offense that could be prosecuted.

His family did not report these crimes until after the Statute of Limitations had run out (3 years in Arkansas) There is nothing “brave” about that.  They knew he wouldn’t be punished, and in my opinion, only did it to clear their own conscience of these terrible acts.

Now, of course, he didn’t murder anyone. and I’ve heard people argue that comparing it to homicide is “over the top” and comparing apples to oranges. It is different, but his actions have had an impact, most would say life-long, on all of the girls he did this to, as well as the other members of his family.  He may have to live with what he did, but those girls have to live with what was done to them, they didn’t have a choice.  While his confession and apology may give them some kind of closure–at least he’s admitting what he did to us–it doesn’t change what they went though.

He was a serial child molester, who now has children of his own.  I’m no expert and I do not know if he’s “recovered”  however, I find it hard to believe that going off and working construction (As mom, Michelle Duggar has stated was his “treatment”)  would be any sort of effective “rehabilitation” for a sexual predator.

While I can understand and appreciate the concept of living in a “sexually repressed” household, and I understand religion (I am a Christian myself, though, not a fundamentalist like the Duggars)  that is no excuse. This was not “experimentation” or “testing boundaries” this was sexual assault, plain and simple. He didn’t just do this once, he did this over and over and over again to multiple girls, including his younger sisters.

I hear the “Let he who is without sin cast the first stone” argument.  Ok, fine, you’re right, none of us are perfect, none of us are without sin, but that does not excuse all the sins of others. I’m fairly certain that Christ wouldn’t be ignoring the seriousness of this act and saying “Hey guys, let’s give this guy a break! We all sin!!  You’re forgiven!” without any kind of consequence.  (I could post a few Bible verses about the treatment of children, here, but I believe that the Bible is open for interpretation and I don’t want to turn this into a Theological debate) And, please, don’t get me started on all the stones the Duggars have cast over the years (and are continuing to throw amid these allegations)  Because we all know, holding hands or kissing someone before marriage or EEK! homosexuality, are terrible, inexcusable sins,  for which you’ll probably go to hell, but child molestation?  It’s all good, there! FORGIVEN!

It sickens me to know that people are totally fine with him just going about his life, like none of this happened and that his parents were ok with him just getting a lil church counseling, working construction, praying about it, and continuing to live under the same roof with their daughters who he molested! He committed one of, if not the most heinous crimes.

Let’s also take a look at  this quote from Josh Duggar:

“I confessed this to my parents who took several steps to help me address the situation. We spoke with the authorities where I confessed my wrongdoing, and my parents arranged for me and those affected by my actions to receive counseling. I understood that if I continued down this wrong road that I would end up ruining my life.”

Did you read that last part?? Let me make it clear

“I understood that if I continued down this wrong road that I would end up ruining my life.”

He would ruin HIS life.  His. I think it’s important to note that he doesn’t say “I was ruining the lives of these little girls” Nope, just his.

Oh, but he confessed, and he said he was sorry…grant the kid some grace!

I’ll tell you why!! Here is most important part of this story:

What are we teaching our girls?

Are we telling them that it’s not really a crime to be sexually assaulted…as long as the attacker is a teen, white, from a good Christian home and asks God to forgive him his transgressions? Or, since it’s your sibling, we will just not tell anyone because you wouldn’t want your brother to get in trouble! Think of what it would do to our family (and our reality show income!) Plus, you’re just a girl, and girls are to be subservient, you’re just learning how much so at a very early age. That’s what Michelle and Jim Bob are telling their girls. And, those defending Josh are telling their girls the same thing, by excusing his actions.

Sorry, but I’m not ok with that.  I want my daughter to know, and I think most mothers and fathers would agree, that if ANYONE hurts her, or does anything of a sexual nature to her that she is not comfortable with, I will do everything in my power to validate what has happened to HER, not to her attacker.  I will support my daughter, I will listen to her, I will believe her, I will love her and I will help her.

I want her, and all females to know, that a sexual assault is NEVER their fault. NEVER. And there is never, ever, ever, any excuse for it. It is ALWAYS wrong.

They are the victims in this.

Not the Josh Duggars.

Update: I’d love to respond to every comment, but unfortunately, I just can’t at this time, so I wanted to address a few things that came up a lot in your comments.  Regarding my statement that Jesus wouldn’t be so forgiving, I should clarify. Jesus would forgive, certainly, that’s what he’s all about.  I just don’t think he’d be so “Oh well, no biggie” about it as so many people seem to be. As a Lutheran, I believe that Christ died for our sins and through faith we are saved. Period. That said, it is not my job to forgive Josh Duggar.  Should his victims choose to forgive then I am 100% for it, if that is what they need to do for themselves, on their personal journey to healing. However, I don’t think we as a society should be so quick to just say “Forgive and forget” in situations such as this, because while it teaches forgiveness, it also ignores the greater impact on women and girls.

The whole point of this post was not to revel in the suffering of the Duggars, It was not intended as a means to bash them in order to make myself feel good.  I don’t feel good when others suffer. I also did not have any strong opinions on the Duggar family prior to this.  I have watched the show a handful of times, and truly had no interest in them. Did I think they had too many children?  You betcha, but it is their life, and it doesn’t impact me at all.  So, no, I do not “enjoy” the suffering that I am sure every single member of the family is going through right now, but this is far too important of a topic to ignore.

My feelings on this topic would be the same no matter who the offender was. It just happened that this particular case became headline news, and prompted me to write about it.

I also want to thank everyone who shared their personal stories. I think it is both brave and strong to share your experiences in such a public way and it can only move to help others who may be in a similar situation.

Also, I greatly appreciate everyone who took the time to read, and comment. There are some great and valid points being made, and it has opened up a wonderful dialogue here, and hopefully in your own lives.

Please note: While I respect everyone’s right to their opinion, and you are welcome to express those opinions here in the comments, please be kind to each other.  No fighting, or nastiness. I will delete inappropriate comments, and if I see things get out of control, I will disable commenting completely.