Orange Pomander Balls are a simple holiday craft that the whole family can help create!
They look great and smell even better! 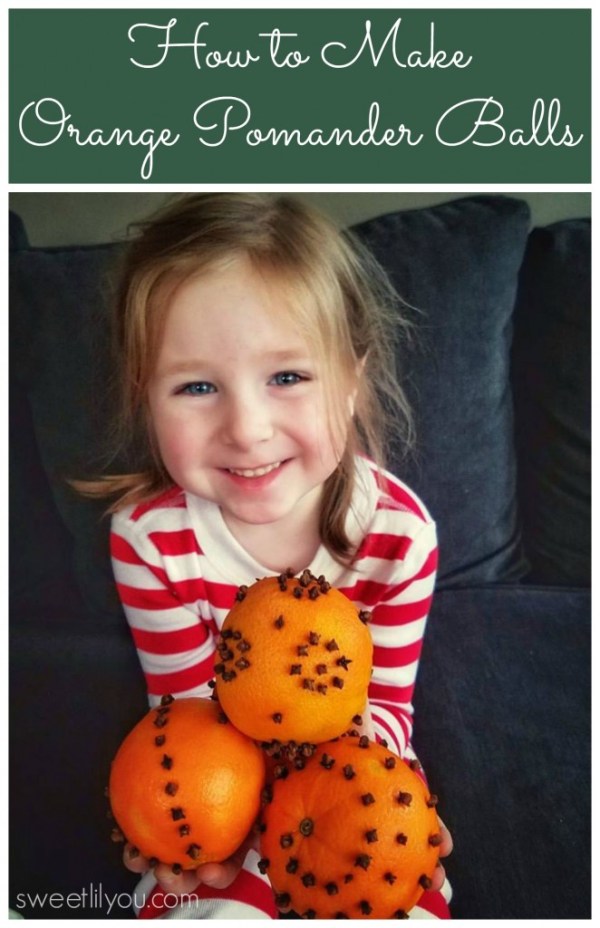 pomander: noun po·man·der \ˈpō-ˌman-dər, pō-ˈ\  :  a clove-studded orange or apple used to scent clothes and linens or formerly carried as a guard against infection.

In earlier times, there was more at stake in the use of an “apple of amber” (the literal meaning of Anglo-French pomme de ambre, modified to “pomander” in Middle English) than the addition of holiday spirit. Pomanders were used to offset foul odors and were also believed to protect against disease. Early pomanders were usually mixtures of fragrant spices, herbs, etc. in small metal containers, and they were often worn on chains, as jewelry, around the neck or at the waist. Today, we no longer believe pomanders ward off infections, but we still like nice-smelling things, and the word pomander survives to name the modern version of this aromatic, decorative object. – Merriam-Webster

I remember making orange pomander balls with my mom when I was a kid. I thought it would be fun to carry on this tradition with Avery!

It’s a very easy craft, and I even find it very relaxing. You can sit and make them while listening to holiday music, or while binge watching Gilmore Girls or whatever 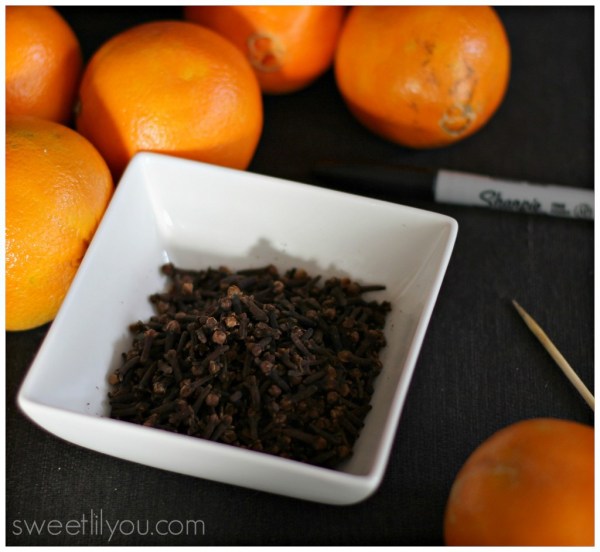 First, you can draw out your design/pattern in marker. Drawing it out first is optional, but makes it a bit easier, especially for kids.

Once you have your design drawn, you can start pushing the cloves into the orange! 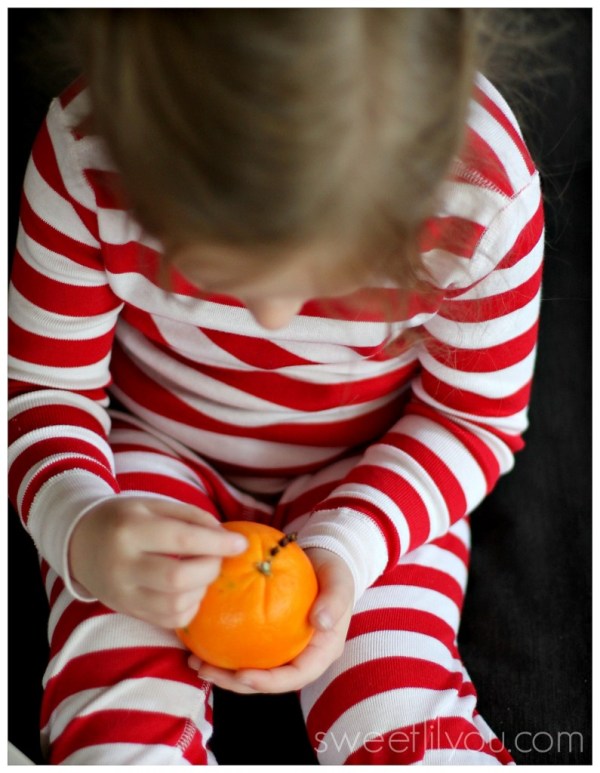 If you’re finding this a bit difficult (the cloves can be a little bit sharp, and sometimes hard to press through the orange) you can poke the holes with a toothpick first.

It really is SIMPLE!  If you’re feeling extra fancy/crafty/ambitious you can use a citrus zester to peel designs in the orange (I don’t have a zester, and I was not feeling extra ambitious as I was doing this project with a 4 year old haha)

Traditionally, a ribbon is tied around the pomander so they can be hung up. But, again…not all that ambitious, and I was planning to put ours into a bowl on the table.

TIP: Your orange pomander will last for a few days before they start to get moldy. To give them a bit of extra life, you can put them in the fridge at night or when you don’t need them out on display.  You can also hang them to dry for a week or so ( in a dark, dry place) I’ve seen some people dry them in kitty litter!  You can also preserve your pomanders by coating & storing them in Orris Root powder. Drying them, and/or using Orris root is the best way to preserve and enjoy your pomanders for years!

The day after we made our orange pomander balls, I WAS feeling a bit more ambitious…and I decided to make an Orange Pomander Christmas tree centerpiece. 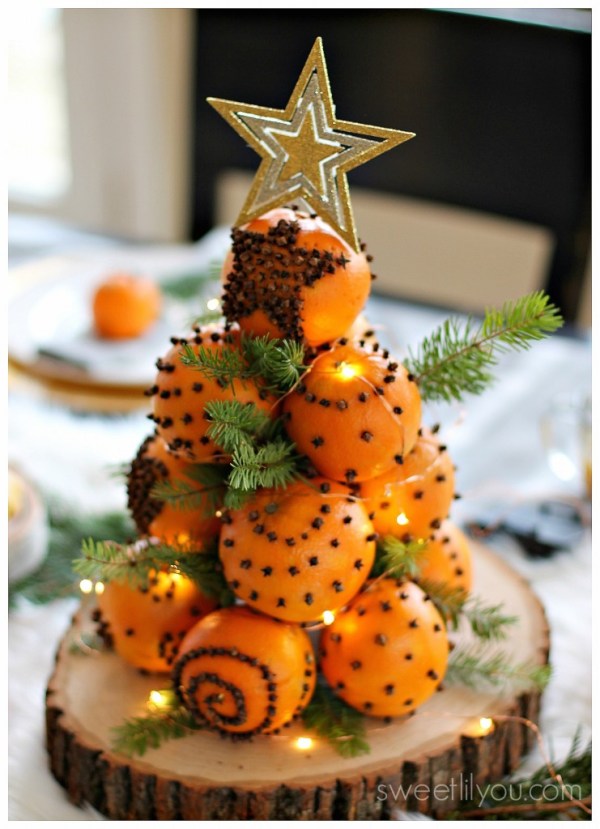 This is also very easy to make, and honestly, you don’t need any sort of super crafting skillz! Unfortunately I don’t have any step-by-step photos of the process, but I’ll try to explain as best I can.

For the base I used 6 oranges. I used wooden skewers to hold two oranges together (like a barbell) Then I laid them out across each other so they formed a circle. The next level used 4 oranges, using the same “barbell” technique. For the next level I used 3 oranges, and stuck them together with the skewers like a triangle. And then I just placed the single orange on top! I added a small star (it’s a tree topped for a mini, table top tree) and stuff fresh pine cuttings in between the oranges, so you wouldn’t see the gaps/skewers!  For added magic, I added a string of fairy lights! I was thrilled with how it came out! 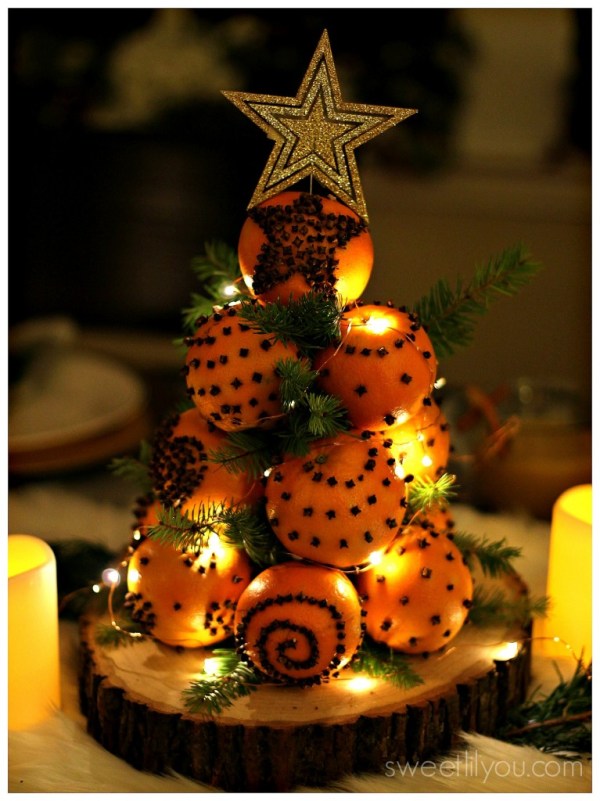 So what do you think?  Has your family ever made Orange Pomander Balls for Christmas?

For more Pomander ideas, make sure to check out our White & Orange Holiday Dessert Party!